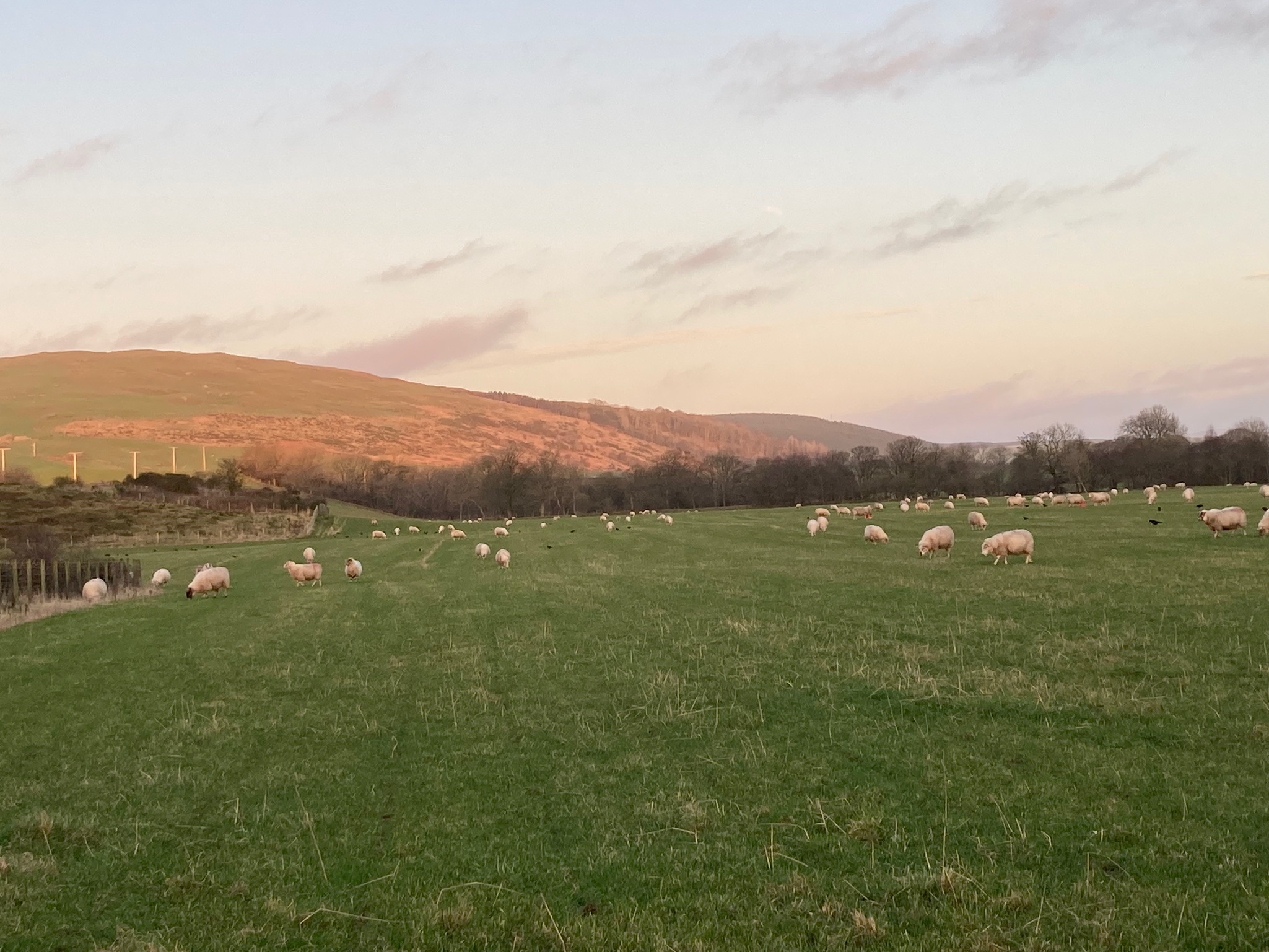 Colmonell is a beautiful, rural, conservation village deep in the heart of southwest Ayrshire.

Led by a community that shares the values and goals of the Galloway & Southern Ayrshire UNESCO Biosphere, Colmonell became a designated Biosphere Community in summer 2022. 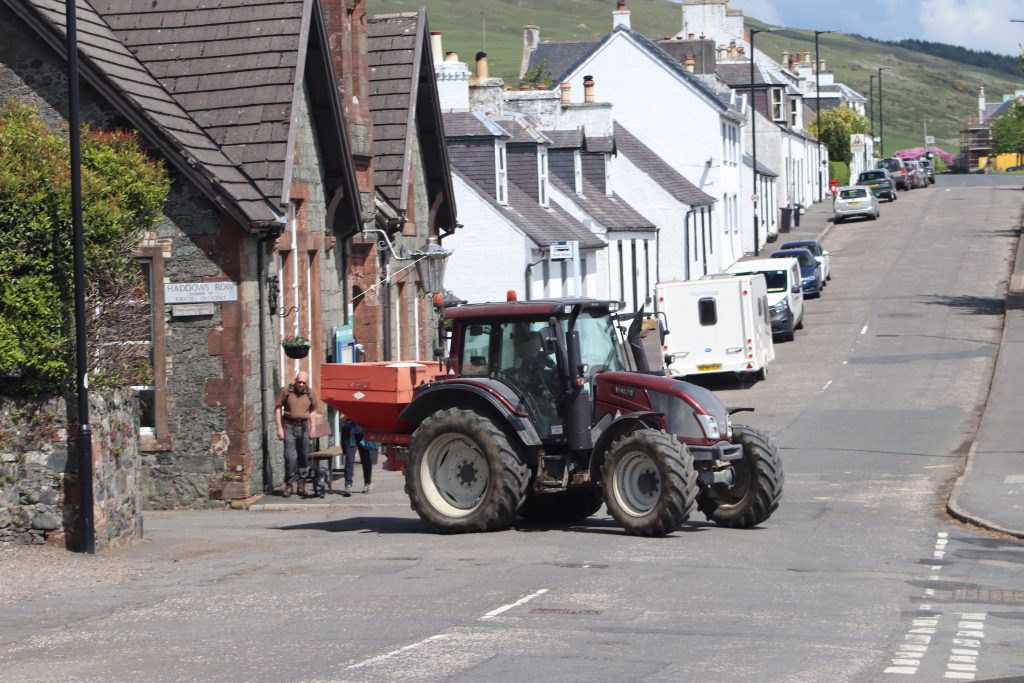 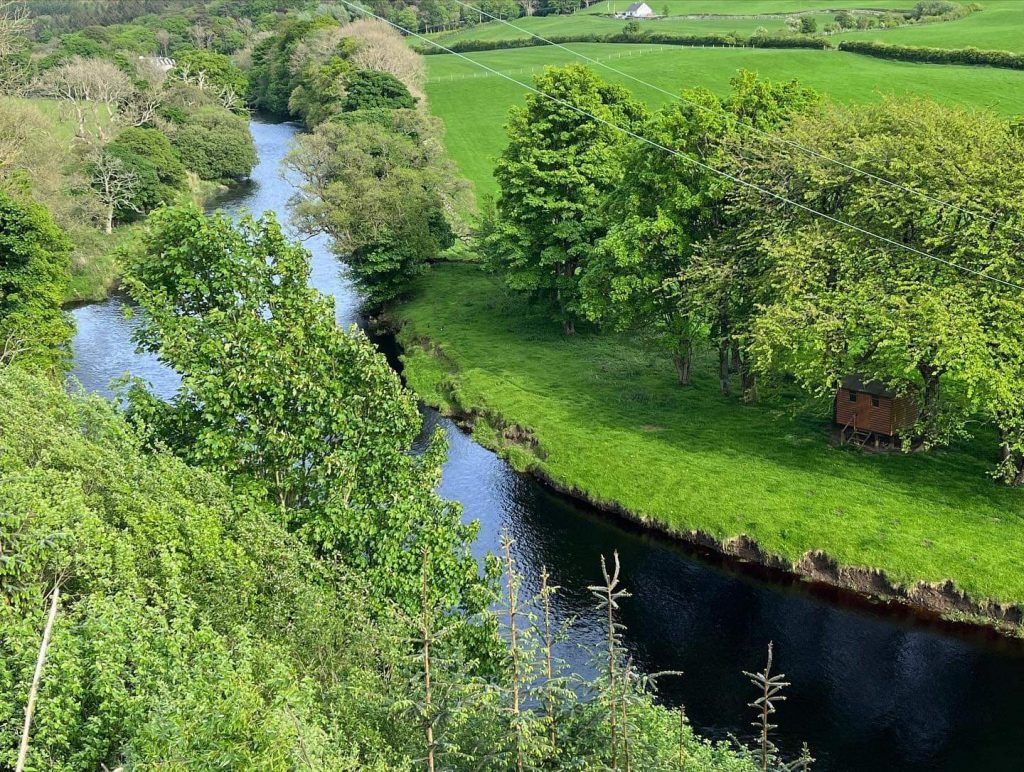 Being set in the beautiful Stinchar Valley means Colmonell is a great place for wildlife-watchers to explore, especially along the banks of the stunning River Stinchar. While under the surface trout and salmon are finning their way up and down stream, oystercatchers, herons, ducks and dippers raid from the surface, while thrushes work busily along the banks. The riversides are laden with fruit trees and wildflowers. Meander away from the river and find yourself surrounded by oak and cherry trees, with huge beech trees standing guard over our village. Wildflowers run through your fingers while buzzards circle above through the big Ayrshire skies.

As you travel in and out of the village, your eye is drawn to Knockdolian Hill, waiting there for you to visit. At just under 900ft the hill stands alone, keeping watch over the sleepy countryside like a shepherd.

Colmonell is a village with a long history, even the origin of the name is lost in time. Some argue it comes from the Gaelic Cill Cholmain Eala meaning ‘(the church of St) Colman of Ella’. Some derive it from St Columba, others from the Latin word columba, meaning ‘pigeon’, because the woods were filled with woodpigeons.

Although now a peaceful, farming village populated by people with a wide variety of occupations and professions, Colmonell’s legends and tales are rather dark. One such story is found on an unusual two-sided gravestone found in the churchyard of St Colmon Parish Church. It tells of the bloody death of the martyred Covenanter named Matthew Mcllwraith.

The current Church of St Colmon is the latest of at least three churches to have existed on the same site since around 1179. It was restored and extended in 1899 by the architect Robert Lorimer who in 1906 designed the village war memorial.

The church website is a mine of information and the stained glass section describes the outstanding windows found therein. The churchyard is the destination for many genealogy and history buffs as it is filled with fascinating gravestones, the oldest of which belongs to Andrew Snell, a blacksmith, who died in 1663. There is also one of the best examples of an Adam and Eve headstone dating from 1758. The rest of Colmonell village grew out from the church and the remains of the earliest buildings, thought to be the school, can be seen in the newly refurbished wall of the churchyard.

Around the village there is evidence of ancient burial chambers, for example the grassy area at Hyslop Crescent and up the hill towards the house at Bardrochat. The house of Bardrochat was built for Robert Finnie McEwen and his family. Over the years it has played host to many a well known name such as Princess Margaret. Beyond Bardrochat there is a dell known as Peden’s Pulpit where Alexander Peden preached to fellow Covenanters. 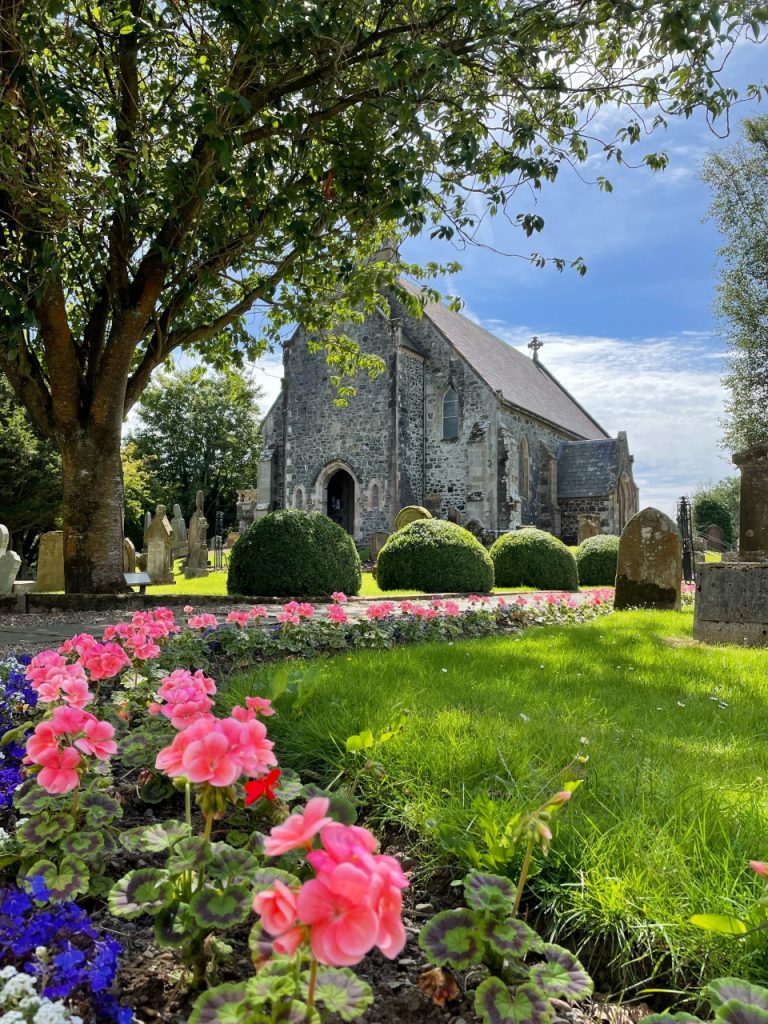 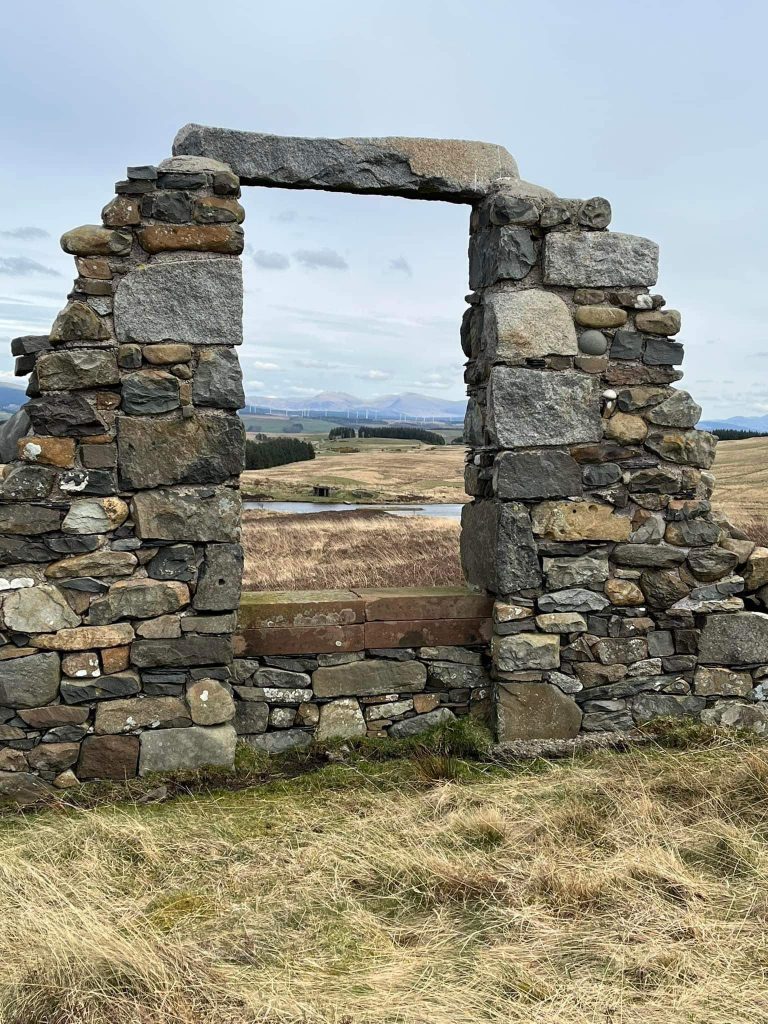 For such a small village we have our fair share of castles and big houses. Craigneil castle ruin, which sits above the village on the opposite bank of the River Stinchar is home to more dark tales. Craigneil is reputed to have a ghost, the Grey Lady, who at times, is heard to give three screeches at midnight. She was one of the Kennedy family believed to have been murdered in mysterious circumstances.

Another story tells of “The Red Slap Fight” which took place at the gates of Craigneil Castle. The Kennedys were residing in the castle, when a prisoner escaped  and when the gaoler overtook him, he gave him such a slap on the neck with a sword that the (sanguinary)  bloody name has remained.

Robert the Bruce is also said to have used Craigneil Castle as a hiding place. Like many other castles there are stories of a secret passageway for escape. During quarrying operations early in the century, part of the castle collapsed unearthing a case containing a beautiful sword. This was taken away for identification and has never been seen again.

Craigneil Castle has been subjected to modern assault. On Hogmanay 1968 at two minutes to midnight, an explosion shook the village of Colmonell, cracking windows and shaking the houses. Explosives had been laid and detonated by a timing device, but no-one was caught and charged with this offence.

Knockdolian Castle in the grounds of Knockdolian House, is an early 17th Century castle similar in style to Craigneil Castle, but in a very much better state of preservation. It stands guard above the river where the valley narrows between the rocky pile of Knockdolian Hill and the more gentle ridge of Sallochan. It has its own dark story known locally as The Mermaids Revenge. This local legend may belong to Colmonell, or it may be claimed by our neighbouring Biosphere Community, Ballantrae. Colmonell’s recently-formed Boarshead Craft Club and enthusiastic locals under the guidance of David Powell have designed and will be weaving a willow mermaid for the village.

The now ruined Kirkhill Castle stands in the grounds of Kirkhill House. It was built by Thomas Kennedy and his wife Janet in 1589.

Education has always been important to Colmonell and the village welcomed its new Primary School building in 2011. It is a climate resilient, low carbon building benefiting from a grass roof.

Colmonell lies at the heart of the Stinchar Valley and relies heavily on agriculture as a core business in the area. Local farmers produce quality beef and lamb, as well as milk which goes to the local creamery at Stranraer for processing into cheese.

Salmon and trout fishing is available in the River Stinchar and at Pinbraid fishery, and shooting at the local estates of Bardrochat, Dalreoch and Knockdolian.

There are many other talented individuals in Colmonell, whose skills include wood carving, wood turning, clock making, local artists, wine making and making wild garlic pesto. We have our very own art gallery and studio in the village run by local artist Allan McNally. Plans are afoot to set up a farmers’ and producers’ market in the village (still in the development stage, but watch this space), and the pub at the Boars Head Hotel offers a warm welcome to anyone visiting the area. 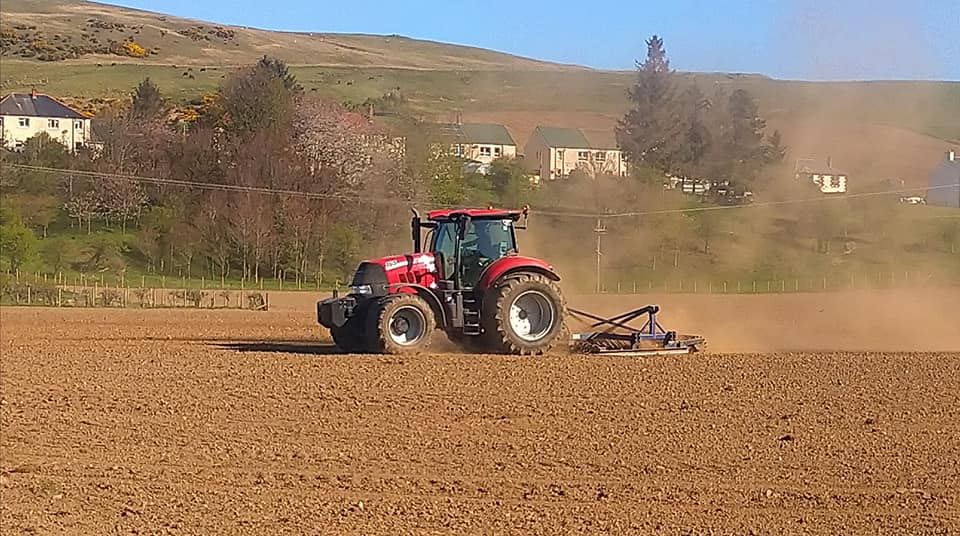 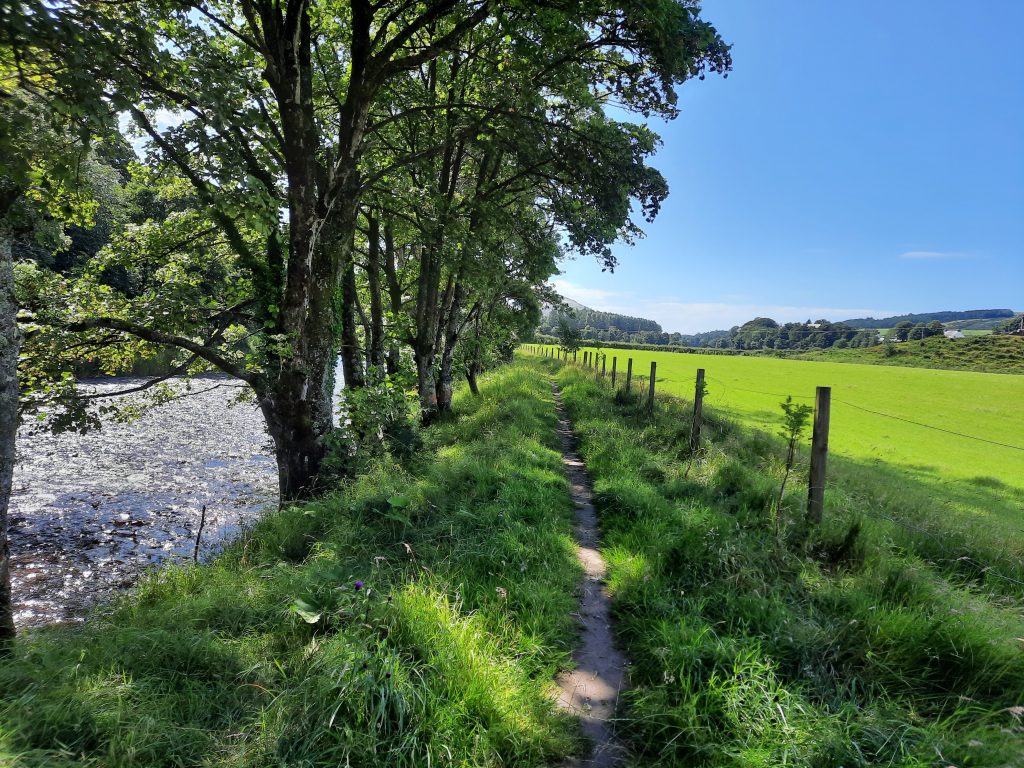 For a small village community we can offer an array of recreational activities for all ages and abilities.  Being situated in the Stinchar Valley we have many beautiful Stinchar Valley walks, these are also part of The Coig and the Whithorn Way.  These are perfect for walking and some are routes for cycling too.  A newly opened community-run toilet block provides a handy stop for walkers in the area! Alongside walks we have fishing on the River Stinchar and at the nearby Pinbraid fishery.

The village has a bowling green and a local pub with indoor games and quizzes throughout the week.  Our thriving community centre hosts a variety of clubs throughout the week which include a choir, youth group, keep-fit & Graceful Years groups, and the village church and kirk hall hosts a weekly coffee morning (currently on Wednesdays) where you can enjoy a cuppa and meet some friendly faces while looking out across the fields and towards the majestic Knockdolian Hill in the distance.

Colmonell has a beautiful community garden situated next to the hall where you can volunteer to maintain the garden or sit and enjoy the abundance of seasonal flowers. We have a large play park with playing field where outdoor sports such as football can be played.  Our annual Fun Day is also held here.

Colmonell and Ballantrae Agricultural Show is held annually (since 1883!) on the second Saturday of August at Boghouse Farm in the village and attracts farmers from across the country to show off their best livestock and compete to win trophies. We also have annual Christmas light events and a summer fun week.

Tranquility is a state of mind relating to peacefulness, quietness, calm, being unruffled, and relatively free of agitation and distraction. Colmonell is a hidden gem which encourages you, because of its relative isolation, to linger awhile in the peace and quiet.

There is an immediate closeness to nature. Seasonality is reflected in the hills, the field and the riverside and tree blossoms. There is an abundance of natural beauty and diverse views of calmness and colours.

There is harmony to be found here, and opportunity for ‘me time’ through both day and night. 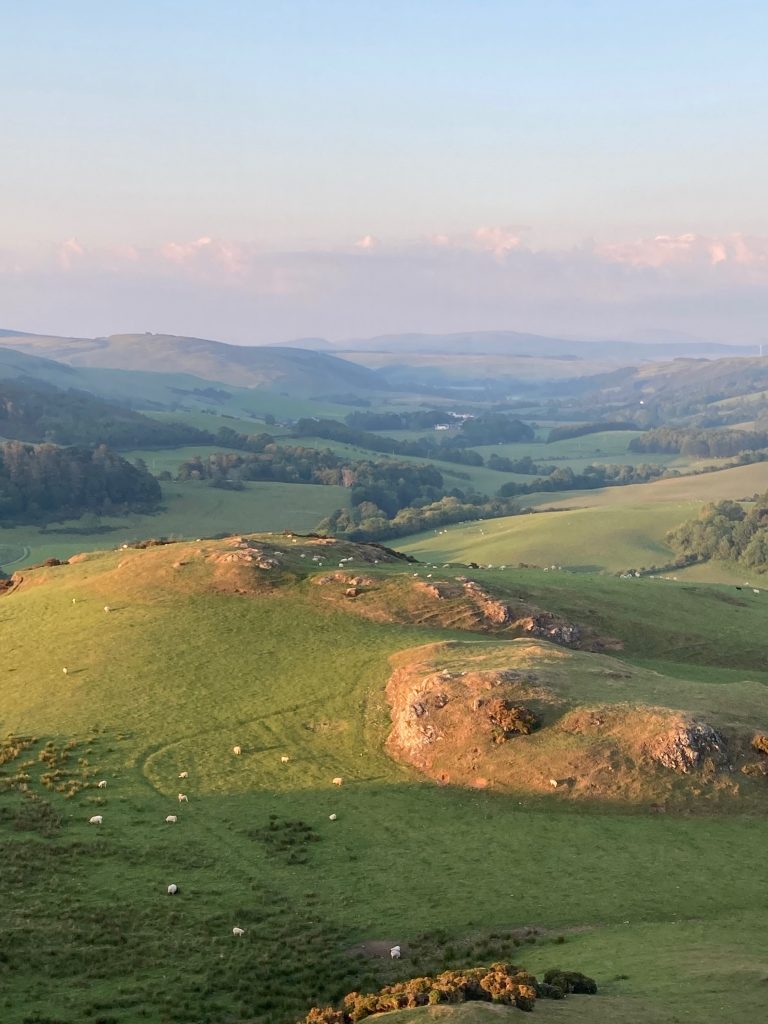 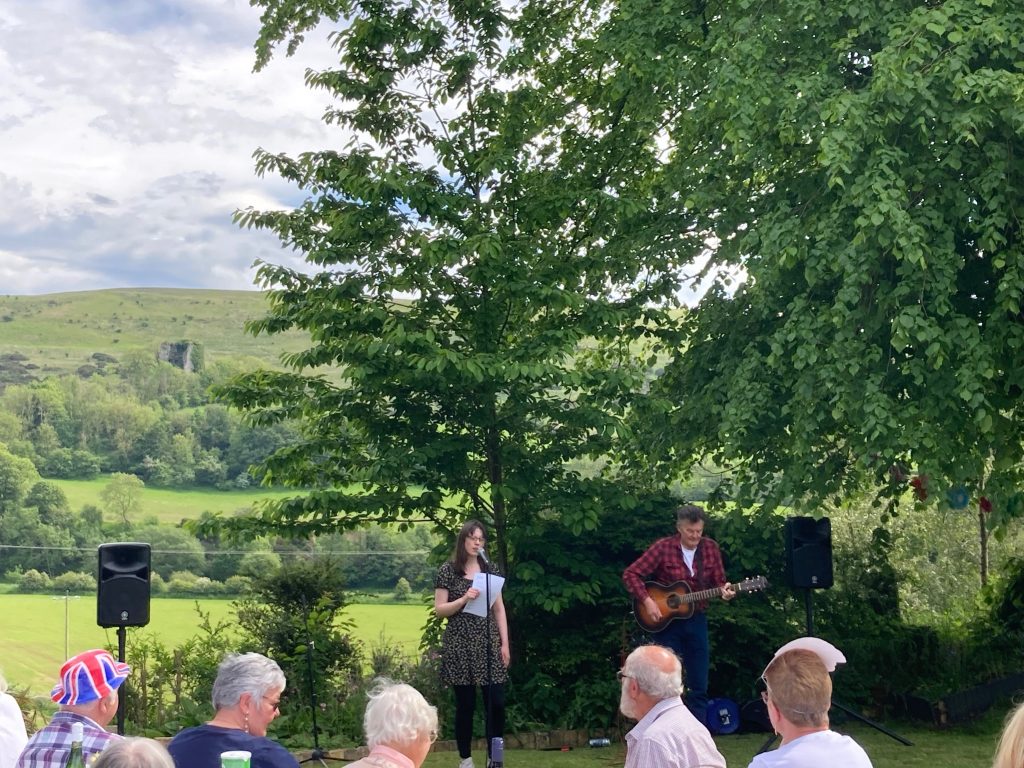 There are opportunities for both individual and collective inspiration here. There is a very distinct landscape and environment, and character reflected in the residents and their independent spirit of community.

Lasting influences and feelings are derived perhaps from the river valley as a ribbon of life.

There is inspiration in the ever-changing beauty of the setting, trees, plants and wildlife which is reflected via artistic, poetic, photographic, craft and agricultural activity.

We look forward to welcoming you, in order that you can #findyourbalance in Colmonell within the Stinchar Valley. 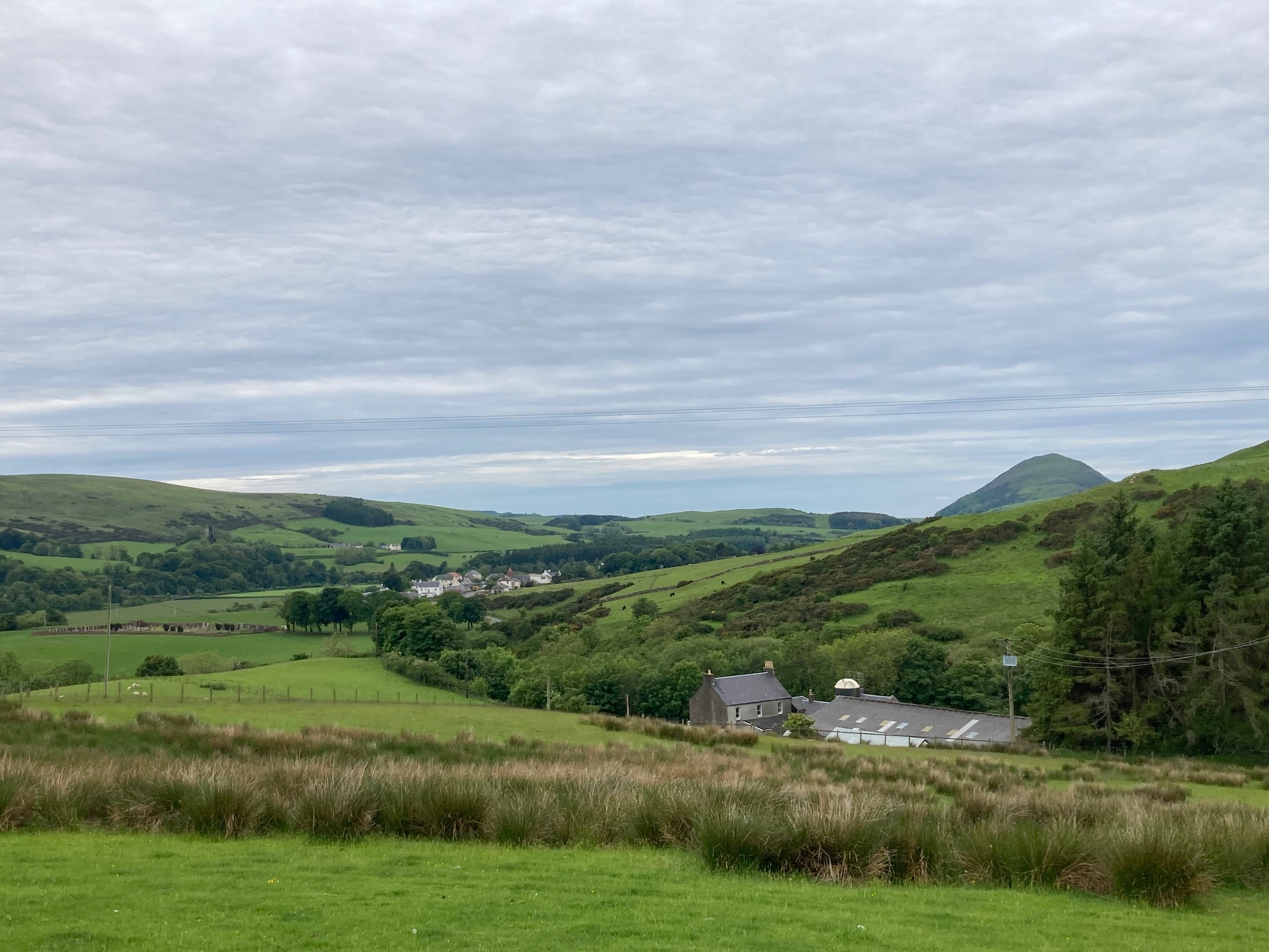 Find adventure, discovery and inspiration in Colmonell and beyond