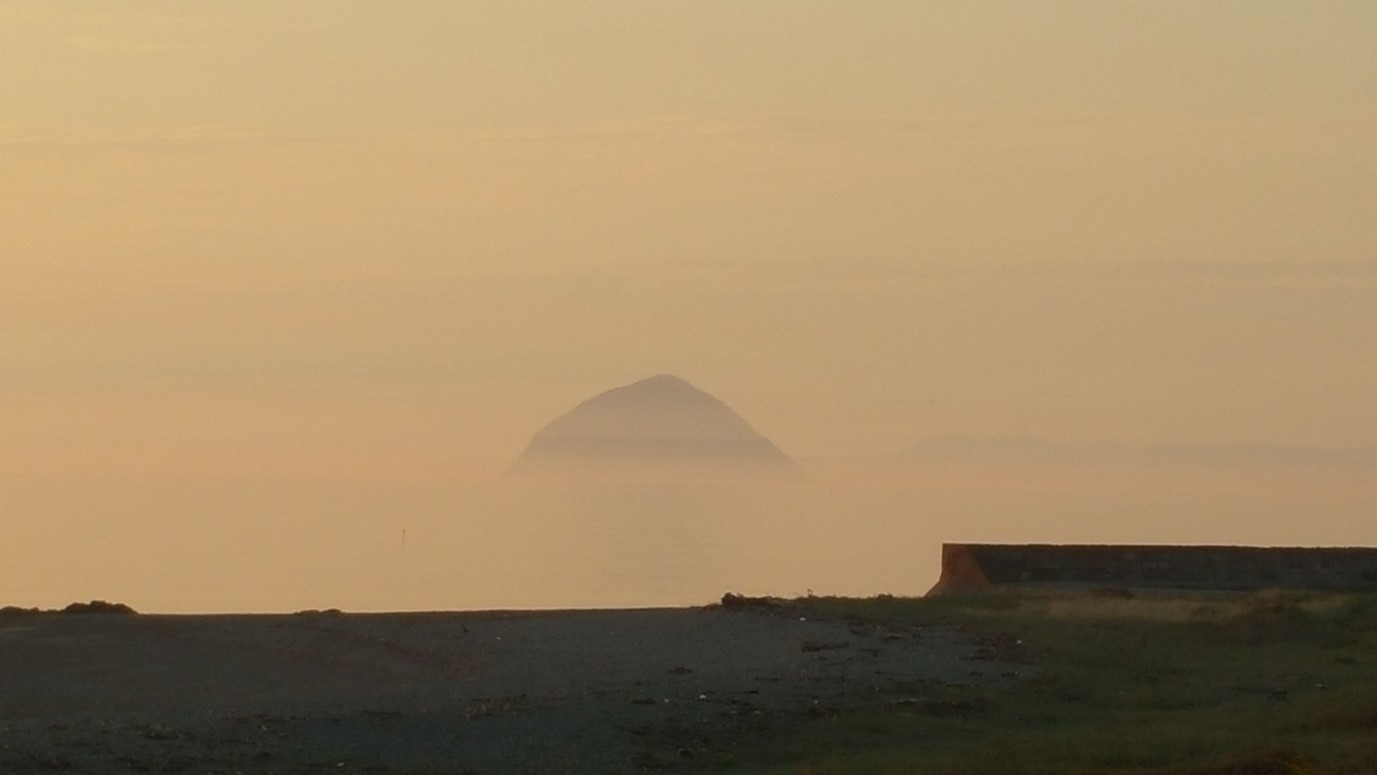 Ballantrae is a village community in scenic Carrick, South Ayrshire.

Located on the west coast of our UNESCO Biosphere, this is a place where the traditions of land and sea meet. Local people have fished and farmed here for countless generations, and travellers have paused for rest and replenishment. Through local, community-led organisations, the residents of Ballantrae are working together with a commitment to sustainability and their unique natural environment, while celebrating their rich cultural heritage with visitors from near and far. 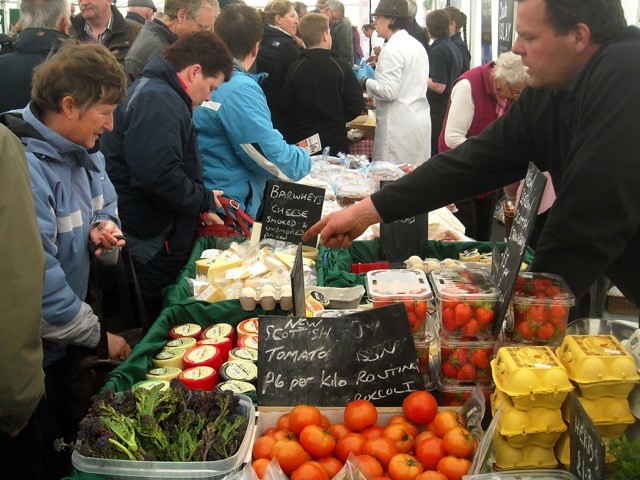 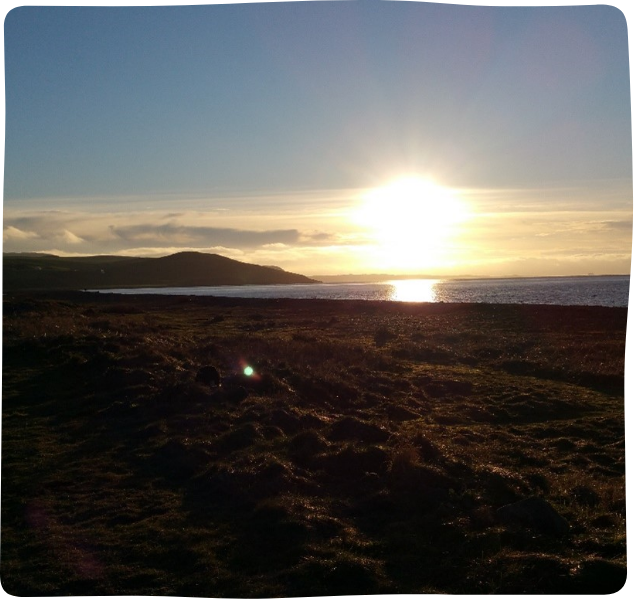 Ballantrae has a wide range of wildlife in the local area because we are blessed to be surrounded by a range of natural habitats, from the sea to the River Stinchar, from the hills to the woodlands, and even in our gardens.

Many different types of seabirds inhabit or feed in the area and gannets are often seen spectacularly diving for fish inshore. Oystercatchers with their bright orange bill, graceful cormorants, plovers and various gulls are seen on the beaches and down at the river mouth, which is a designated bird sanctuary. There are often geese there, and a bank of swans who nest in that area.

In the sea there are common harbour and grey seals and in summer basking sharks and porpoises are seen by local fishermen, and the River Stinchar is a well-known and popular salmon river.

In the woods at Glenapp Castle & Estate there is a wonderful walk where, depending on the time of year, you will see bluebells, daffodils and primroses, and in autumn the beautiful red and orange leaves. You can even wander amongst giants, as the estate is home to several Giant Redwood trees. There is lots of wildlife to spot, including red and grey squirrels, long tailed tits, grey wagtails, dippers and owls.

On the hills and in the fields around Ballantrae there are deer and pheasants to be seen as well as foxes, hares and rabbits, and sparrowhawks and buzzards in the sky.

Closer to home, in our gardens, there are blue tits, blackbirds, thrushes, robins, wrens, sparrows and goldfinches.

The sunsets in Ballantrae are some of the most beautiful you will see anywhere in Scotland, and on occasion the Aurora Borealis or Northern lights can even be seen.

You can’t fail to be amazed at the sight of Alisa Craig rising up out of the sea. This ancient, hardened magma is some of the best granite in the world, and one of only two places in the UK where granite is extracted to make curling stones, for the unique Scottish sport of curling – now an Olympic sport! Ailsa Craig is now uninhabited, and bird a sanctuary that can be visited by boat.

The coastline from Girvan to Ballantrae is a Site of Special Scientific Interest (SSSI) due to the unique geology known as the Ballantrae Complex, where serpentinite is combined with mixed beds of lava and sedimentary rock together with igneous and metamorphic rocks. 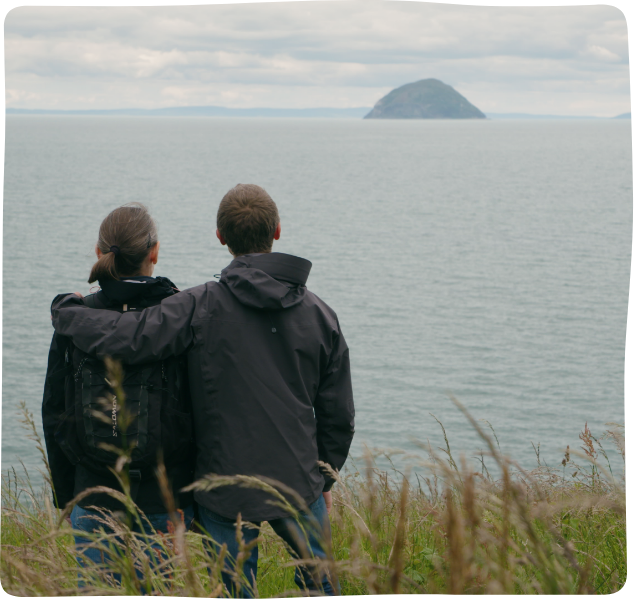 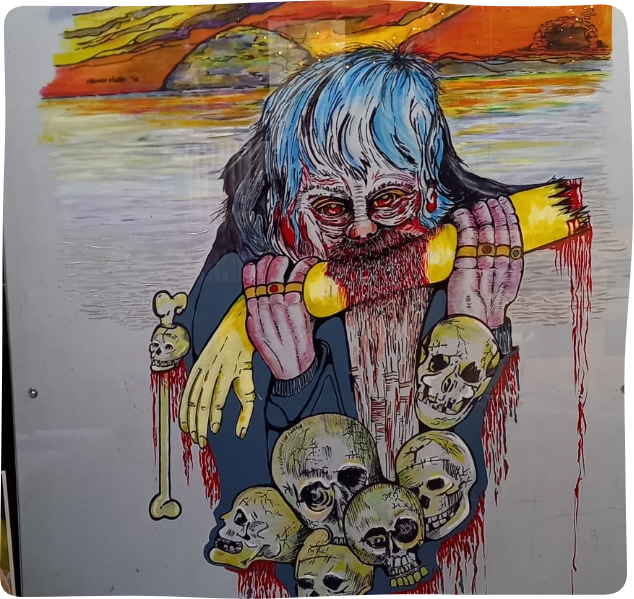 The village of Ballantrae dates back at least to the 15th century and has been associated with the fishing industry throughout its history. Herring, salmon, lobster and crab were all landed at the harbour. On the hill above the bay can be seen the remains of a windmill, built in the late 1600s and since designated a Category A Monument, recognising the early industrial heritage of the area. Lacemaking was also an important industry in past times.

However, most surprising of all, smuggling was a significant occupation in Ballantrae and along this coast, and a festival each summer keeps this legacy alive. It is said that the bloodthirsty tales of local legend Sawney Bean, the cannibal who is said to have lived in a cave below Bennane, were only stories created to keep the curious away from the caves in which contraband was stored.

Another sinister creature of local legend is the Knockdolian Mermaid.  It is said she would sit on the rocks and sing in the evenings underneath Knockdolian House. However, when her signing disturbed Lady Knockdolian’s new baby, house staff were ordered to destroy her rock. The mermaid took vengeance by cursing the baby, and all the babies of the Household that came after it, and finally even the Lord and Lady met their demise, leaving the castle empty and slowly tumbling into the ruins we see today.

Another local sea cave however was home to a modern day, and very real, hermit; Henry Ewing Torbert, known as Snib Scott. He was commemorated after his death in 1983 by a cairn and a plaque dedicated to the ‘Respected and Independent’ gentleman.

South of the village a monument commemorates Robert Cunningham, a postman who died in a blizzard in 1908 whilst delivering the mail.

Mary Queen of Scots stayed briefly at Ardstinchar Castle, the home of Hugh Kennedy. Although long-since ruined, a Biosphere project has used virtual reality to imagine how it once looked, perched strategically above the river. The Kennedys were notorious for their feuding, and an information board in the graveyard by the family mausoleum tells their story.

In 1928 Elsie Mackay, actress, interior designer and pioneering aviator disappeared off the Donegal coast during an attempt to become the first woman to fly across the Atlantic. A stained-glass window was installed in her memory at Glenapp Church by her father, the Earl of Inchcape.

The Kings Arms has been at the centre of village life for over 200 years and has recently been taken into community ownership to become a hub for the village as well as its pub. 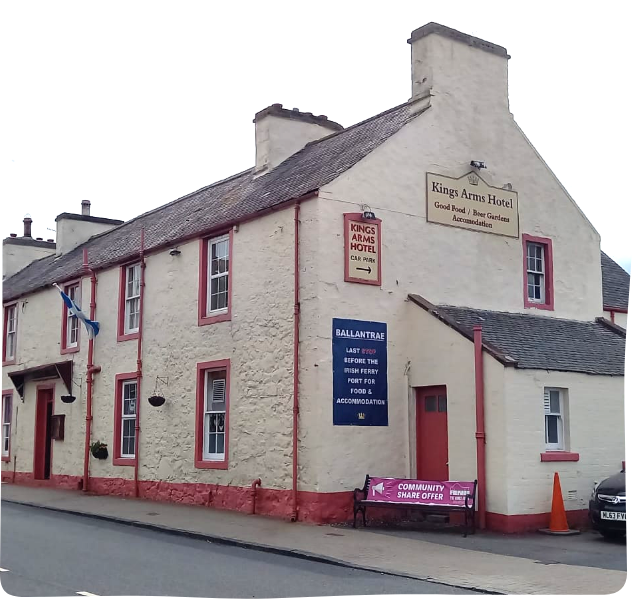 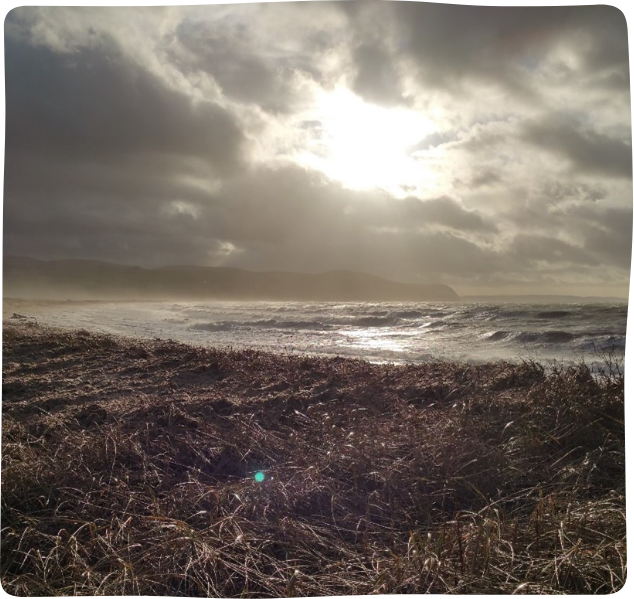 Ballantrae and the coast have long been a place of inspiration for many photographers, painters, poets; some famous, many less so, who return again and again to capture the mood. Storytellers remind us of our cultural past and ancient landscape. Hopeful fishers cast their lines from the beach or fly fish the river Stinchar, while others pilot small boats along old and trusted ‘grounds’ hunting for lobster and herring.

Local villagers plant garden crops and share them with neighbours, while a friendly welcome can always be found in the local shop and garage. Community groups of Ballantrae support a happy and caring community, while the Kings Arms Community Pub and Hub forms the heart of the welcome, a place to find info, a smiley greeting and warm souls.

Tranquility can easily be found in this peaceful little village, nestling on the South Ayrshire coast below the protection of the beautiful Galloway Hills. From the shore or the hills, cast your eyes southwest to the distant coast of Ireland, and to the northwest meet the Isles of Ailsa and Arran and the Mull of Kintyre. The mighty Atlantic looms beyond giving those with the inclination to bask in the power of the sea. Ever present myriads of different birds squawk and whistle their music in harmony with the rumbling sea on the pebble, rock and sand shore.

Gulls and guillemots glide their way into the prevailing westerlies while the waders and swans peck at the shore. Seals, dolphins, porpoises and shoals of fish swim by, some portly seals resting a while on the ancient shore rock north of the old harbour.

Every evening is a testament to big sky with its wide variety of clouds showing different weather over large distance and eternally changing and glorious sunsets. Immerse yourself on bonnie coastal walks along the beach and the paths bordered with wild and surprising vegetation and flowers. Just close your eyes and listen to the clamour of nature whilst being cleansed by the pure air. Or watch and wonder at where the vessels on the sea are heading, plying their way as they have for hundreds of years. 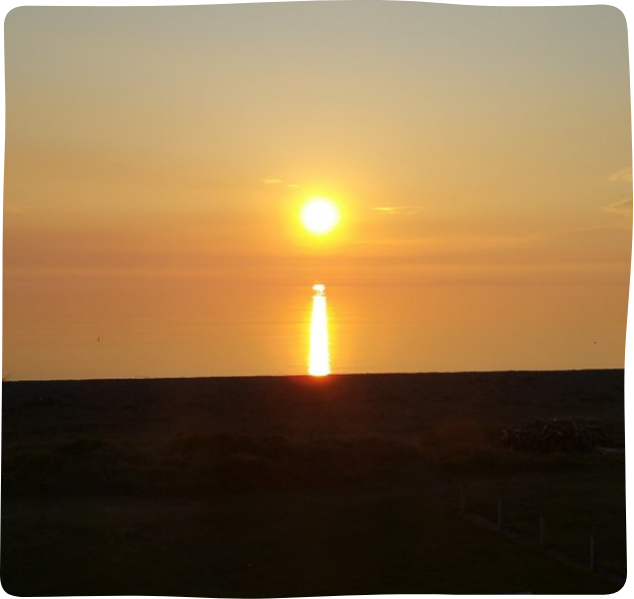 Ballantrae’s coastal location makes it a fantastic base from which to enjoy a range of activities and fun! Without a doubt, the seafront – which includes a long pebble beach and the Ayrshire Coastal Path – is a must see. The sea and the coastal weather are dynamic and different every day – at times bathing you in light and warmth, and others, embracing you instead with bracing winds that blow your hat off. The sea itself swings between glassy and inviting to crashing onto the pebble shore creating sprigs of salty spray. The seafront is a wonderful place to spot seabirds swirling over head or foraging amongst the pebbles, and can be enjoyed on foot, on bike, or by car. And of course, if you are brave enough, you can venture into the shallows to dip or even swim!

Moving from the coast inland, one can explore green woodlands and hills, including the wonderful Glenapp Castle grounds.

Within and around the town we also have bowling and tennis facilities, art displays, castle ruins and much more. Stop in at the Kings Arms Community Pub and Hub to pick up some visitor information and bump into some locals!

Ballantrae is most famous of all for its annual Festival of Food & Drink! (11th & 12th June 2022). This event showcases the best of Ayrshire food and drink and has come to include producers from further afield as well! Most recently taking place online, this Festival of Food & Drink is an excellent way to immerse yourself in what the West of Scotland has to offer your taste buds!

Ballantrae is the place to find local gems such as Ayrshire tatties. Trae Bakes café in the Garden Centre is a must-visit; Scotland is famous for its ‘tray bakes’ – they are what we were raised on – and this café has loads of different kinds! If it’s something more refined you are after, try afternoon tea at Glenapp Castle for fine treats in a stunning location. 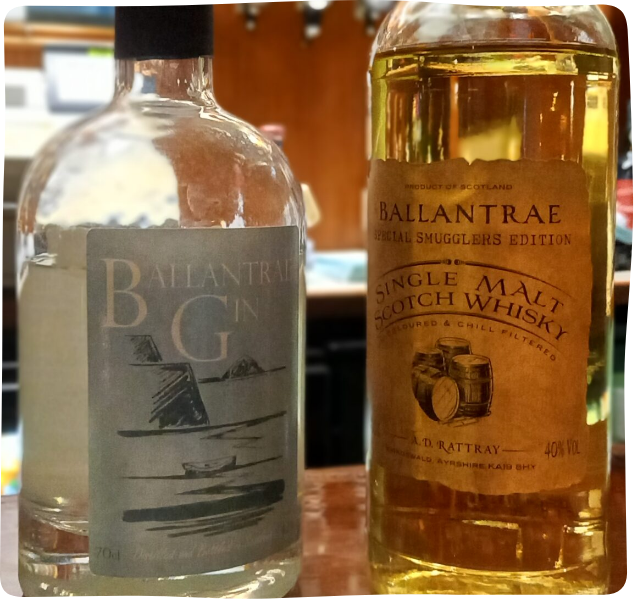 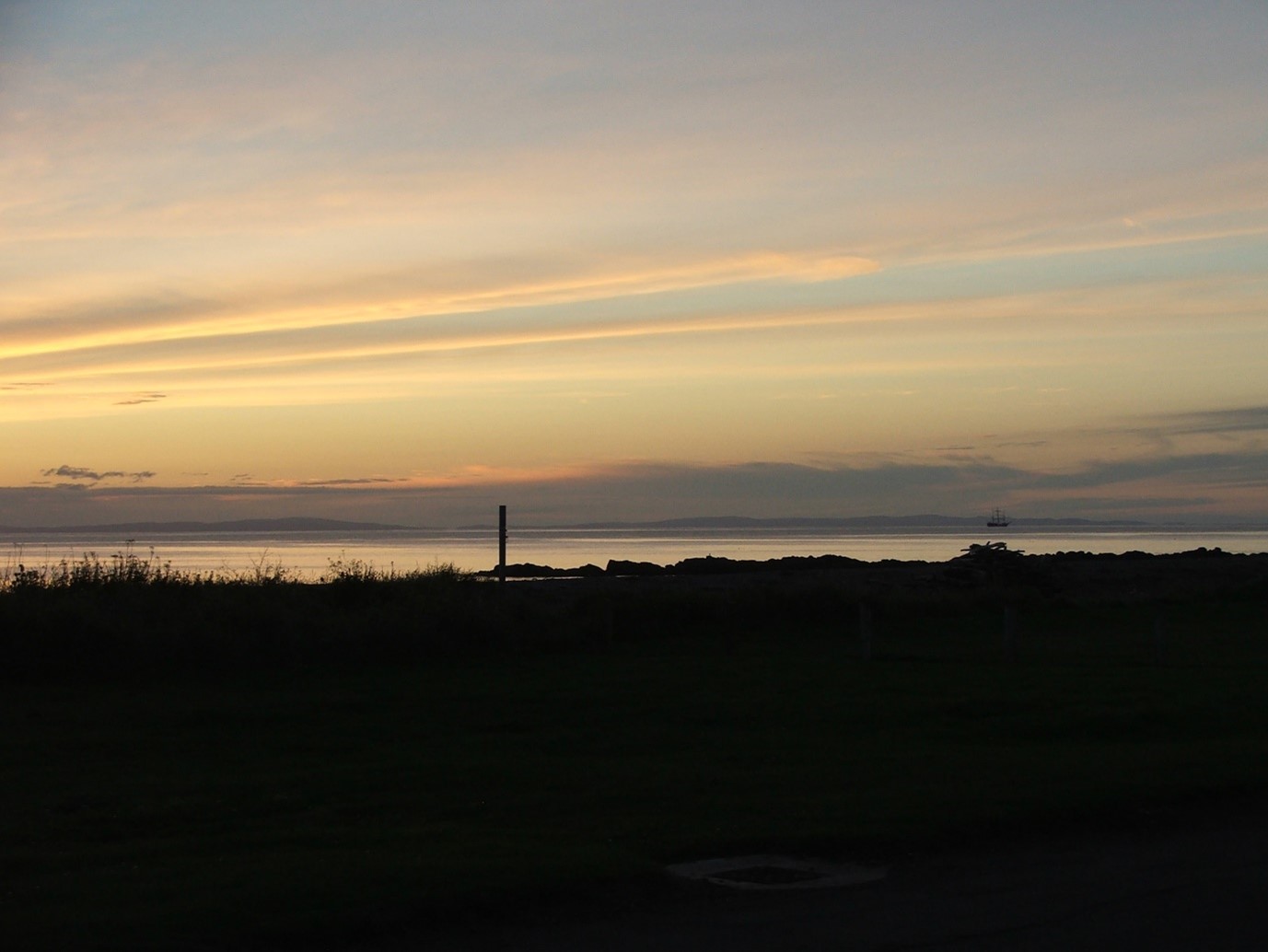 Find adventure, discovery and inspiration in Ballantrae and beyond